Organization of the LHC

The Principal Officers and the Board of Directors

The League has the following principal officers; a Chairperson; two Vice-Chairpersons; seven Directors, two of whom shall be the Vice-Chairpersons; and an Auditor.
The principal officers are elected from among the the Member Cities by the General Assembly, and theirs' tenure of office shall be from the day of their election to the day of the General Assembly meeting to be held four years later, at which the successors to the posts are elected.
The principal officers are constituent members of the Board of Directors and shall be called by the Chairperson as the occasion demands.
The members of the Board of Directors of the LHC are as follows since September 2018:

The City of Kyoto is responsible for the secretariat of the League of Historical Cities. 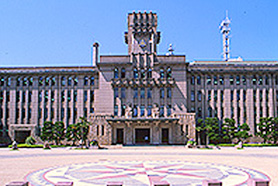 The League of Historical Cities Secretariat