The city of Vladimir is located on the left bank of the Klyazma river 180 kilometers from Moscow, it is a part of the Golden ring of the Central Russia. The main events of the Russian history ocuured on the Vladimir land.
Prince Vladimir the Red Sun founded the city in 990 as a fortress to protect the
North-Eastern Russia. In the XII-XIII centuries the princes of Vladimir were the
strongest in Russia and had a title of «The Great». Their authority was high not only
in Russia, but also in Byzantium. The XII-th and the beginning of the XIII-th century
was a period of prosperity for the city. In 1157 under the reign of the prince Andrey
Bogolubsky it became the capital of the Vladimir-Suzdal principality and the political
center of ancient Russia. In 1299 the residence of Metropolitan was moved from Kiev to Vladimir. The city lost its importance as the political center of the North-Eastern
Russia in the XIV century, when the biggest part of ancient Russia allied around Moscow. 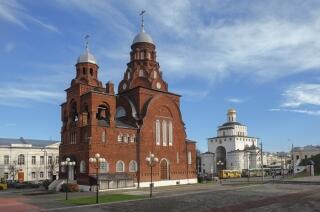